Trabant - the little car that could 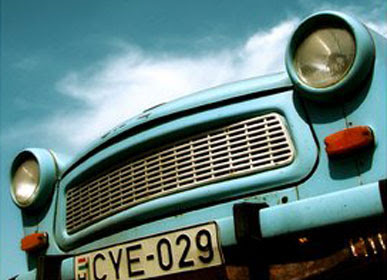 The Tale of the Trabi
©LRMTrabantTales2008

The image of Hungary's most popular, populist car, the noisy, blue-smoke belching Trabant was so linked with the system that many now see it as a symbol of the Communist era in Eastern Europe.
However, although the Trabant and Communism shared many similarities: clumsy, smelly, uncomfortable, and some say unattractive, there is one major difference.
Communism collapsed with the Berlin wall in 1989, but the Trabi is still rolling along. In 1997 enthusiasts, nostalgists and those who use their Trabi every day as a trusty method of going to work, celebrated the fortieth birthday of the beloved Trabi.
The Trabant turned 50 in 2007, and although a brief mid-life crisis threatened its existence, it continues to cough and splutter through the streets of Budapest.
Love it or loath it, the Trabi won't go away. Budapest mayor Gábor Demszky tried unsuccessfully in 1995 to rid the capital of the Trabant. The Green program offered two years' free BKV transport pass, worth Ft30,000 for those who traded in their Trabi's.

Demszky did not bargain on three things:
people with small businesses needed their Trabants,
a painter and decorator could not take his equipment on the metro,
you can pack the contents of a small flat into a Trabant.

Trabant jokes
How do you double the value of a Trabi ?
Fill it with petrol.

Why does a Trabi have safety belts?
So that you can use it as a rucksack if it breaks down.

What does a Trabi owner do about potholes?
Park in them

April 2004
Those who trade in their two-stroke Trabis for one with a catalytic converter will now receive Ft200,000 incentive. After May 1 and entering the EU, only cars with catalytic converters will be considered road-worthy. Old-style Trabi lovers have until July 15 2004 to swap their beloved set of wheels, or at least update their mechanics. Disabled Trabi owners can get either Ft200,000 cash back or a Ft400,000 loan from the Environment and Nature Protection, Water Authority. (Orszagos Kornyezetvedelmi, Termeszetvedelmi es Vizugyi Foigazgatosaghoz). The financial reward will only go to those who promise to take their smelly, smoky Trabis out of circulation and buy a car, younger than ten years old, four-stroke, catalytic converter fitted set of wheels. Pensioners who refuse to give up their tried and trusted Trabis will be able to buy the catalytic equipment for Ft20,000.
Information from the KvVM department Tel 477-7400. or on the website http://sansz.ngo.hu/modules.php?name=News&file=article&sid=2362
Posted by lucyrm at 15:58 5 comments: Links to this post 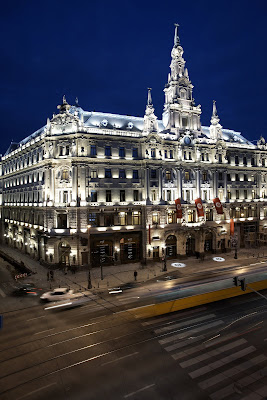 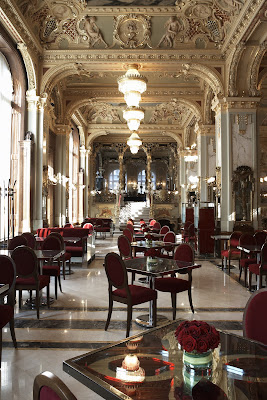 “Newyork, you are the coffee house,
where I sat so often,
Let me open your door,
and maybe I can sit down for a while,
Just like a beggar who rests on a bench,
And look around at what remains within me and all around...”

Ferenc Molnár wrote most of his great work ‘Liliom’ here.
Soon after the coffee house opened, legend states that Molnár hurled the main door key to the New York Café into the Danube saying that it should never close.
However, one day it was forced to close for renovations. The cafe flourished until the First World War, enjoyed a brief revival in the thirties, and then went into decline.
It suffered significant bomb damage during the Second World War and was ignominiously rammed by a Russian tank during the 1956 Uprising. In the 1950s, the New York was turned into a sports equipment shop and an Ibusz office, then, after closing in the late 1990’s, its blackened exterior was shrouded in protective sheets and wooden scaffolding for years, with only the spire soaring unhindered skywards.
During the Socialist period, the café was renamed the Hungária kávéház, and was famous for the slowest and most surly staff in town.
Now it sits on the regenerating Nagykörút (Grand Boulevard), just along from the newly-refurbished Corinthia Grand Royal Hotel, and urges the progress of the great revival.