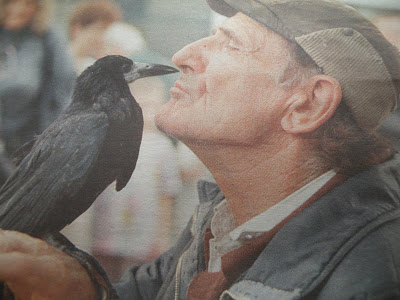 “Louder, Louder”, orders Pisti Bácsi (Uncle Stevie) and four huge black crows squawk on demand, flapping their jet black wings and creating a terrifying spectacle.
Little children giggle nervously and huddle closer to their parents, but they are transfixed, and not only by the birds but by the sweet tiny kittens and mischievous black puppies, dozing in a pile on a deck chair nearby.
The scene comes straight from a 16th century Brueghel painting, as the old man feeds bread from his mouth to a gigantic black crow, named Ügyes (‘Skillful’). The three other birds, Pici (‘Tiny’), Csavargó (‘Vagabond’) and Csöves (‘Tramp’) line up to sit on his head.
He offers the birds to sit on the arms of those brave enough, as, he says, the birds bring good fortune.
Pisti Bácsi, or rather István Ferenc, to give him his official name, is 72 years old and has shared his caravan, parked on Határ út in the twentieth district, for the last ten years since retiring with four giant black crows, two enormous black dogs, nine puppies and five kittens.
Every day he travels to Deák tér, in the heart of Pest, riding the metro with a selection of animals in a cardboard box and cart arrangement, a friend brings the larger dogs in a car. He spends the day at the square opposite the plush Porsche salon, entertaining the crowds of tourists and Hungarians alike with his eccentric, medieval zoo.
A mound of intertwined tiny puppies and kittens of varying brown and black colours are dozing in a heap on a beach deck chair.
Unusually, all the birds, cats and dogs get along together, and the crows occasionally give the puppies a friendly peck.
Pisti’s teenage daughter, Anna-Mária sometimes comes along to help him. She spends her time chasing after the playful puppies who wander off in search of fun or food and one adorable fluffy ginger kitten, who modestly retires to a bush to relieve itself. The tiny animal can barely open its eyes. “His eyes wouldn’t open at all but I have been putting cream on them and they see better now,” says Pisti Bácsi attentively. 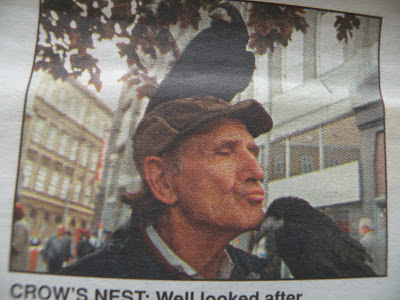 Pisti Bácsi has placed a modest message to say he lives with all these animals and needs money to feed them and buy medicine.
He needs a little extra income since he retired from working for Budapest Transport Company, digging up the streets and laying the tramlines. Most people, however, ask if they can buy the crows and the answer is always a firm ‘no’.
A shopper with two small children asks if the puppies are for sale and Pisti Bácsi asks for 1,500 forints each. “What breed are they?” asks the man. “Wait until they grow and you’ll find out then”, answers Pisti Bácsi.
The little kittens may be sold after the winter when they are stronger, he says, but he is not desperate to sell off his family.
The donations from the passers-by are enough to feed everyone.
Two huge black Rottweiler and German Shepherd cross-breeds sit behind like the dogs with eyes as big as soup plates, who guarded the tinder box in Hans Christian Andersen’s fairy tale. In a more modern touch, one wears plastic sixties sunglasses and looks super cool, lying quietly at the back, no doubt he could well protect his master if there were any trouble.
In the hustle and bustle of the modern world, many stop for a few minutes to gaze at this comically gothic spectacle, the diminutive ancient man with huge black crows on his arm looks more like an animal trainer at the court of an ancient king, offering birds that bring good fortune and money to those who dare to hold them. Pisti Bácsi kisses two year-old Pici (Tiny) lovingly on the beak, offering the bird bread from his mouth.
The audience is transfixed. “They must be a hundred years old,” says one man and asks if Pisti Bácsi has ever tried making Crow Soup, “I know a recipe if you want to try”, he says.
Pisti bácsi is offended that he should ever try to eat his friends. “The animals are my biggest friends, I know some nice humans, but I also know some really wicked ones. Animals are always honest”.
Pisti bácsi thinks he may also have nine lives, like a cat. On Saint Stephen’s Day, August 20 he fell from a nine metre height in another of his haunts at the Fisherman’s Bastion up in the Castle District. “I lost consciousness, but I did not lose my life”, he says. This was extremely fortunate for all the dependents of this Magyar Doctor Doolittle.
“Why don't the crows fly away?” asks a tourist. Pisti bácsi’s reply says it all, “Because they have never known such love before”.
Posted by lucyrm at 10:42 3 comments: Links to this post