The Pioneers and the Children's Railway 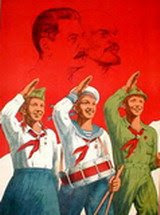 This year the Hungarian Pioneer is 62 years old and thinking more about claiming his/her pension than playing with trains in the forest.
There is hardly a family photo album in Hungary that doesn’t contain a picture of a child in a red nylon neckerchief over a white shirt and aluminum belt buckle, standing proudly to attention at a ceremony to mark April 4, March 15, May 1, November 7, or other Socialist holidays.
Many people believe the Pioneers disappeared like most organizations of the socialist state under the ideological rubble of the Berlin wall.
However children are still lighting camp fires and singing songs, albeit with less political lyrics, up in the Buda hills, at one of Hungary’s biggest Pioneer camps at Csillebérc.
Most socialist state organizations disbanded or changed their names and identity, but somehow the Pioneers survived. After radical changes, the youth group still has an impressive membership of 76,000, making it the largest youth group in Hungary.
Today, there are no uniforms, no red neckerchiefs, no pledges of loyalty to the socialist state and no military ranks. But the spirit of the pioneers lives on and provides a very necessary function.
“There is a parallel between the freedom kids have today and the rise in juvenile delinquency.
In the past, the Pioneers taught children a kind of behavior, although there was not much freedom of choice. However today, children have no feeling of community.
In the early 1990’s there was a huge vacuum, but now more and more people are turning to us.” says Péter Rácz, leader of the Magyar Úttörôk Szövetsége - the Association of Hungarian Pioneers which this year celebrated its 50th anniversary on June 2 1996.
From 1946 to 1988, the Pioneers were a mass movement.
They were present in schools, sports clubs and housing estates.
Children could join at 7 and become a Kisdobos -Little Drummer, then progressing to úttörô -pioneer until 15 when it was hoped he or she would join the Communist Youth Association, (KISZ)
Today, there are 450 local Pioneer groups in every county in Hungary, involving kids aged 6 to 14, and Rácz expects the numbers to continue to grow.
After 1956 the Pioneers became an all-inclusive youth club as part of the state party, “Ninety-nine percent of children were members,” says Rácz.
In the second half of the sixties not all children were members, leading up to now when it is voluntary.
Csillebérc is the only Pioneer camp left of the more than 40 once operated in Hungary.
Most of them were sold off, some under dubious circumstances, during the previous government of the Democratic Forum.
Rácz acknowledges it is difficult to shake off the old reputation. “We kept the name because the movement itself developed through the years.
In the seventies the leaders were those who like being with children, not those in it for political gain.”
The Pioneers gave all kinds of benefits to children.
Rácz says, “The summer camps, which still exist were a typical kind of socialist idea, providing a way for poor children to escape the smog in the long break.”
The strong central leadership of the Pioneers has now evolved into one of many children’s group organizations. “We do not try to force the kids to do anything and there is a strong appreciation of local autonomy in groups.”
The children decide their own names, symbols and under what conditions their local group will operate.
They can wear a uniform if they want and many chose a different colored necktie.
Some stick with the traditional red tie, others go for brown, white or Hungarian flag colors.
However, the new slogan is “Pioneers for the friendly third millennium” which still rings of Socialist propaganda.
Four major events have been organized this year, a Pioneer Olympics, a Magyar Settlement commemoration, Environmental protection and the anniversary celebrations.
The Pioneers are members of the International Falcon Movement (IFM) involving 60 countries.
Rácz explains, “Before there was a rigid order, now the emphasis is on free time. We try to stay away from politics. Our duty is to help the children’s personalities develop into responsible adults in the democratic world.”
One thing they still try to maintain is the “Left wing sensibility” of solidarity and responsibility to society, but Rácz says, “Tradition is not so important, we don’t want to live in the past..”
The member ship card is a striking example of the inner change.
Before, every Pioneer had a little book, like a junior Communist party membership card with the twelve rules of conduct. Now the membership card resembles a credit card for children.
It is plastic with a cartoon squirrel.
Rácz says, “The difference is that now we are more playful, more jolly. We stress that adults and children are partners. It is grown-ups and kids together, with the adults helping in the background, rather than the old way of adults demonstrating and children listening.”
In the Csillebérc camp high in the Buda hills almost all traces of the old Socialist order have been removed. Only a circle of flag poles remains in the center, while alone in the undergrowth stands the statue of a pioneer boy, holding aloft a flag with the motto, “Elôre” (‘Forward!’) and flowers in his strangely huge hands.
He is ignored by the hundreds of children coming for class at the American school which shares the building with the Pioneer’s Csillebérc headquarters. 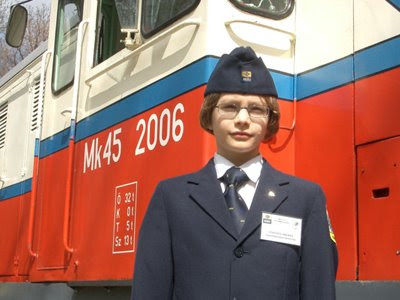 The Pioneer’s 12 points for life were seen as guides to teach the child how to live correctly.
The was a strong emphasis on learning how to be a responsible member of society.
Somsits says, “If anything happened at the camp, the leaders informed the school. Naughty children did not get to go to fun camps at the Balaton and there was much community work, giving us a sense of discipline.”
Discipline is something that teacher Erika Csikós, 25, says is now missing in the lives of her students today. “When we were Pioneer, there was always a goal to be reached, today’s children do not have any aim or motivation.” She says the children have no sense of patriotism for their country and many cannot recite the National Anthem. “At the Pioneer camp we learnt to respect our elders and contribute to the community.
Patriotism was mixed in with Communism, of course, but when we said we were working ‘for the homeland’ it was for Hungary, not for the Soviet Union.
Csikós tells of a friend who had to go to compulsory Pioneer meetings, because, although her father was in the Communist party, her mother was from an aristocratic family, and so had been banned from higher education. (The authorities feared the next revolution would come from those who were intellectuals or thinkers and so denied further education).
The authorities worried that the young girl would not get a proper Communist upbringing and so she had to attend extra meetings, so that her mother would not be fired from her job.
Mária Völgyesi teaches at a secondary school in the twentieth district. In the fifties, she was one of the first Pioneers, then a youth leader and then a full leader.
She became a teacher as a result of good experiences at the Pioneer camps and still keeps the illustrated diary that the children compiled on the tours around some of the most picturesque parts of Hungary. “We walked 150 kilometers in 10 days and there was a wonderful group atmosphere, sitting around the campfire and sleeping in tents.
We prepared all year for the summer camp.” She says the self-discipline and initiative fostered in the camps is missing today, but hopes the Pioneer will re-establish itself again in the future as the nationwide network. “The Pioneers gave the child a backbone and a community. Now you see so many out on the streets in the evening with no sense of purpose.”
She says that, these days, no political party bothers with the children of high school age, “Not even FIDESZ which is supposedly a youth party.” 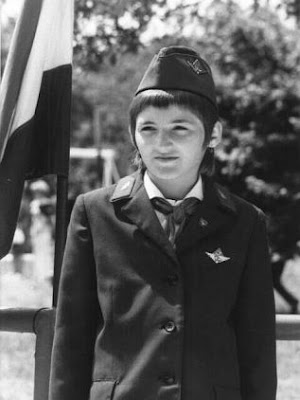 All aboard the Socialist Ghost train
Young Pioneers built the 12 kilometre narrow-gauge rail line in the Buda hills in 1950. It was built and run by people too young to get a driving license.
The museum at Hûvösvölgy station has a charming collection of memorabilia – socialist realist posters, cups and trophies, awards from youth movements in other Socialist countries, uniforms and old photos of Pioneers at work show the railway’s past.
In 1995, the railway celebrated 45 years of chugging through the hills and a nostalgia train ride visited different exhibitions at each of the eight stations
Pioneers no longer run it but a diligent group of child ticket collectors and conductors still takes tickets and salute as the train pulls out of the station from Hûvösvölgy to Széchenyi hegy about half and hour later.
On an autumn weekday morning, the train chugs along solitary with only one passenger. An adult driver negotiates the bends and tunnels and one child in an oversized uniform collects tickets. His hands are invisible under the huge navy blue sleeves, but he politely takes and punches the 60 forint ticket and bids a good journey.
The children’s enthusiasm and civility bears little resemblance to adult MÁV workers. A girl guard gives a half wave-half salute as we pull out of the next station, this is repeated along the track.
The mountain railway has two tiny carriages with wooden slatted seats and a stove in the back. Black and white pictures of Budapest sights decorate the walls.
Virágvölgy (which once bore the name “Elôre” -forward!) station has a weather beaten plaster plaque with three pioneers standing proudly pointing toward a brighter socialist future.
The Csillebérc station has two tiling tableaus on either side of the station building wall. One shows pioneers at play, the other shows pioneers raising the flag at the beginning of another day at summer camp, a ceremony that lasts to this day. 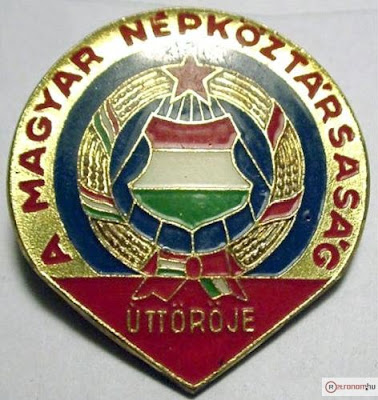 “For the working people, for the homeland, forward -steadfastly!”
The 12 points - the Pioneer life law