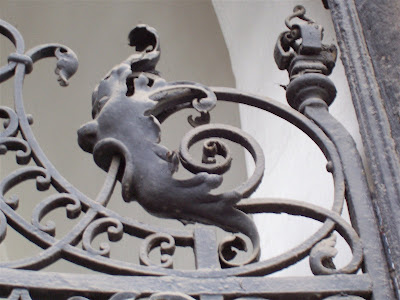 Wow, thank you for this very interesting and informative article on Art Nouveau in Budapest!

We were so amazed at Art Nouveau in Budapest that we wrote a book:
"Art Nouveau Iron Work in Austria Hungary" published by Schiffer Publishing . . .
We documented in over 500 photos the wonderful iron work of Vienna and Budapest.
Federico Santi, Author

Thanks for the great and concise overview!! I find it very useful and I much appreciate your knowledge of Budapest.

Szia Lucy!
You may not remember me, but I was one of the BBJ clan, and spent lots of time with leBor, Condon, Nadler and the other troublemakers around the Press Center...

I lived on Eotvos utca, 41/b, a block away from Nyugati.

If you start with your back to Nyugati and walk down Eotvos utca, there is some incredible residential architecture in the first 4-6 blocks.

Bauhaus next to some of the finest examples of Art Nouveau next to Communist Brutalist, next to classic Austro-Hungarian, and everything in between. There really is a shocking number of styles and eras represented in those few blocks between Nyugati and the piac.

I miss Budapest something fierce... blow a kiss to it for me...
- Christian

I will be visiting Budapest in May. I am especially interested in seeing Secession architecture. I have found this article very useful in my research.

I have used it, Google search and Google maps to find locations. #3 and #4 are the same location. The address listed in #4 is correct. #3 is not.